On the Importance of Loving Yourself 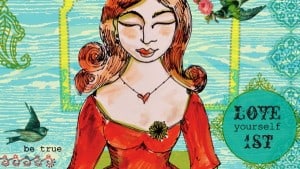 As women speakers, we can’t expect others to love us more than we love ourselves.

It’s true! Self-dislike blocks growth. On the other hand, humbly approving of yourself strengthens your relationships, increases your productivity, and affects every part of your world.

Your level of self-approval paints itself on your face, colors your voice, and programs your thoughts, feelings, words, and actions.

You know, much of the problem with poor self-approval today can be connected to the mass media. We are bombarded by pictures of
beautiful, perfect, skinny women.

That woman is an absolute, total myth! If we compare ourselves to that woman, naturally our self-approval will suffer.

However, those who break free of this distorted image of woman and see their unique gifts clearly, will be happier and have higher
self-approval ratings. I know beautiful, talented women with very low self-esteem – low levels of self-approval.

On the other hand, I know women who are plain – by the standards of men – whose self-approval is high … they are positive and upbeat about their abilities. What makes the difference? I’d like to suggest that mental strength is one of the keys.

Author Patricia Holland once gave university students some wise counsel from which we can ALL learn. Pat remarked:

“The battle many of you wage on an interior front concerns me. Many of us create a civil war within ourselves by internalizing problems of fear, uncertainty, self-doubt, and worry – often over things we can do preciously little about. If we spend our time and energy worrying about being too tall or too short or about our freckles and warts and big noses, then I fear we’re doomed to certain defeat. The person who is engaged in such a constant internal fight has little energy and power left to win the outside battles. You can’t afford to be your own worst enemy.

And taking the battles inside – firing mortar shells into your very soul – is potentially one of the most damaging of all human activities. If you turn such outside matters into self-criticism, letting them damage your spirit and your self-worth and esteem, then you’ve begun a battle with a very high mortality rate indeed.”

World-renowned women’s activist, Dr. Paula Fellingham marks the end of her world tour by bringing The Women’s Global Summit to Los Angeles, California on October 28 and 29, 2011. Inspired by the need of women universally hungry to express their views, Dr. Fellingham has created the largest international and fastest growing women’s network in the world. To learn more about The Women’s Global Summit go to www.GlobalWomensSummits.com