What IS A Thought Leader? 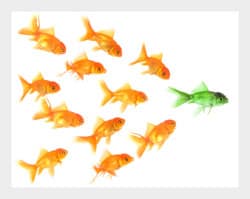 “Thinking is hard work, which is why so few people do it.”
– Henry Ford

Google the term “thought leader” and you’ll find the same tired descriptions and definitions listed over and over. Which is the exact opposite of true innovative, visionary thought leadership.

Instead, what shows up is a host of self-proclaimed thought leaders. All using the words, but if you look closely, you’ll discover what’s missing is the thought. In fact, the most common advice you’ll see is to blog and write articles and you too can be seen as a thought leader. NOT!

Visionary thought leaders are few and far between.

According to Wikipedia, “Thought leader is business jargon for an entity that is recognized for having innovative ideas. The term was coined in 1994 by Joel Kurtzman, editor-in-chief of the Booz Allen Hamilton magazine, Strategy & Business.

‘Thought leader” was used to designate interview subjects for that magazine who had business ideas that merited attention.

Decades have come and gone since Henry Ford’s hard-hitting quote, yet not much has changed. There certainly isn’t a lot of original thinking going on in business today, either.

In 2006, I was part of a start-up publishing company that was truly before its time. We published an award-winning book on thought leadership called The Art of Original Thinking: The Making of a Thought Leader by Jan Phillips. Rather than add to the noise, I’d like to share Jan’s definition of thought leadership with you. It exemplifies the type of thought leadership desperately needed in 2012 and beyond:

“A visionary thought leader is a visible, vocal agent of evolutionary movement toward global good. Thought leaders are original thinkers who have released themselves from outdated thought patterns and embraced the complexities of today’s world with an understanding of their role as cultural co-creators. They are highly imaginative and deeply inspired, capable of envisioning and moving toward a future that integrates profitability and sustainability, commerce and compassion, material abundance and spiritual well being.

Thought leaders are tuned in to the world at large and the world within. They have learned to balance their lives, manage their thoughts and lead from the heart. Thought leaders are catalysts for others’ creativity because by their very nature, out of their own authentic wholeness, they model a new way of being in the world, a new way of doing business and building community. Aware of the dangers of dualistic thinking, thought leaders tend to synthesize rather than separate, collaborate rather than compete.

They are bridge-builders, architects of new social networks that link together businesses’ need for profit, employees’ needs for purpose, and society’s need for solutions. Operating out of an intrinsic reverence for life, thought leaders seek to create solutions that benefit the earth, its people and the providers — an emergent phenomenon known as triple bottom line thinking. This kind of thinking is the mark of an evolved consciousness. It is integral and highly energetic, powered by the fusion of mind and heart, spirit and matter. It is grounded in and guided by a vision that is itself, of the whole and for the whole.

Visionary thought leadership is about the “we” not the “me.” It is spiritual awakening practically applied. And because it is holistic in nature, sourced in unity and tending toward community, it is transformational and generative, leading to a higher order of creativity both personally and organizationally.” -Excerpted from “Visionary Thought Leadership” white paper by Jan Phillips.

If the passage you just read resonates with you, perhaps you’re more of a thought leader than you think.

The world needs women willing to speak out and lead the market with their ideas. More visionary women thought leaders.

As the Voice of the 21st Century, WSA is leading the way.

What ideas have you been holding back from sharing in your industry? Why?

Feel free to share them below in the comments. It’s time!