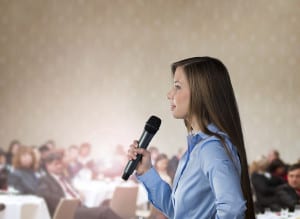 With the experience that comes from doing a lot of public speaking, professional politicians, company leaders or those who regularly speak in public for any reason usually look extremely calm, cool and confident when facing the crowd in the room, at the rally, or on radio or TV. However, what we can’t see are the butterflies that are careening back and forth inside.

Yes, even the professionals feel a bit nervous before they get up to speak. It’s totally normal to feel anxious when what you’re about to say may determine whether or not you’ll a) keep your job, b) get the job, c) be applauded or hissed for promoting your ideas, d) earn the respect and trust of crowds of people or e) be skewered and made to look ridiculous the next day on one of the major TV comedy shows. It’s enough to make you want to say, “It’s not worth the pain,” and run the other way as fast as you can.

Knowing, however, that every word they say will be scrutinized, analyzed, pulled apart and put back together differently than they intended doesn’t seem to stop thought leaders of many kinds from running for office, facing the challenge of being misunderstood or ridiculed, or appearing on TV to explain themselves. They certainly don’t let anticipatory fear keep them from speaking their minds, saying what they believe, and taking the flack that comes afterward.

What protects them from that debilitating fear that prevents others from even dreaming of facing the critical crowd? They don’t take it personally!

One of our biggest fears when we even think about getting up to speak is that the audience, small or large, will be evaluating us and looking for ways to prove us wrong. We worry that they’re seeking ways to verify we’re incompetent, that we don’t deserve to be standing in front of them, our opinions are worthless, we don’t know what we’re talking about, and we have a lot of nerve thinking we’re someone to be admired or respected. In other words, we’re not good enough, smart enough or successful enough to expect to be taken seriously by anyone.

None of this is true!

The fact is that you really can’t expect all of the people to agree with you all of the time. There are always going to be those who think what you have to say is garbage, who can’t listen to anything without needing to criticize it, who go through life judging everything and everyone by their own particular standards. What they think of you or your speech has nothing to do with you and everything to do with them. Taking their criticism personally is a lesson in banging your head against a wall. They’ll never change. Don’t waste your time on them.

There are also always going to be people who think you’re terrific, who respect what you say, listen with both ears and take seriously the wisdom you’re offering. Speak to them! Focus on the ones who ‘get’ you, not the ones that don’t. If you took a poll, most of the audience would be on your side, wanting to learn from you. Talk to them. Give them the benefit of all the goodness that’s in you. They deserve it, and so do you.

For the few who are readying the poison arrows, remember that it’s not about you, it’s about them. It’s their own personal agenda, their inability to open their minds and hearts to new ideas, their refusal to give anyone a fair hearing. You may never be able to reach them.

It’s not your fault. Don’t take it personally!