Proud To Be Crazy! 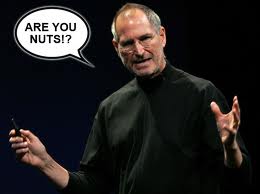 “Here’s to the crazy ones, the misfits, the rebels, the troublemakers, the round pegs in the square holes… the ones who see things differently — they’re not fond of rules… You can quote them, disagree with them, glorify or vilify them, but the only thing you can’t do is ignore them because they change things… they push the human race forward, and while some may see them as the crazy ones, we see genius, because the ones who are crazy enough to think that they can change the world, are the ones who do.”– Steve Jobs

Steve Job’s words are enough to make anyone proud to be crazy. So next time someone rolls their eyes at you for thinking outside the box, stirring up the pot, or marching to the beat of your own drum…you just tell them, “call me crazy all you want. Steve Jobs would call it genius!”

I have to admit, sometimes I feel like what we’re up to at WSA could qualify us as crazy. Setting out to design a new paradigm for our industry…I mean, what the heck does that mean, right? It definitely can leave you with more questions than answers, that’s for sure.

But here’s one thing I know for sure. If what we’re up to is creating a new model, then we have the opportunity, if not the obligation to be a demonstration of that new model. Only, because we don’t know what that looks like yet (we know more of what it’s not, than what it is), the only thing to do, is not do what it is we’ve done before by rote or by habit. Literally, we are here questioning ourselves every step of the way; asking ourselves, “is what I’m doing in this moment something I’ve been conditioned to do? Am I doing it because it’s what everybody else is doing or am I actually at cause in consciously creating in this moment?”

It’s a bold and sometimes lonely place to stand, but I’m certain that what lies ahead for all of us is greater than we could ever imagine. It’s worth being cast as a little nutty when you’re up to something big, don’t you think? I see now also, that it’s ok to not know “how” it’s all gonna play out. In fact, it’s really not our job to know. That’s what divine orchestration is all about.

Steve Jobs captured it perfectly when he said, “And no, we don’t know where it will lead. We just know there’s something much bigger than any of us here.”

Liora Mendeloff is a Speaking Industry Expert, with 20+ years of experience behind-the-scenes with some of the world’s greatest thought leaders, government officials, celebrities and entrepreneurs, in helping them fulfill their vision.  Liora’s driving force is to facilitate getting women and their core message out into the world, the purpose behind her newest venture, the Women Speakers Association. Liora also created InstantMediaKit.com, the secret tool used by the Pro’s to get seen, get booked and get paid!